Production of ultra-pure water by means of distillation (WFI)

Distillation according to the European Pharmacopoeia is a stipulation in Europe in the production of water for injection purposes (WFI). Distillation is used almost exclusively for this purpose in the USA as well. One reason for this is the high quality of the water in terms of microbiological impurities. In the distillation process, water that has been previously cleaned (for example with an ion exchanger) is heated with previously produced steam and forced under pressure into the evaporator for distillation. 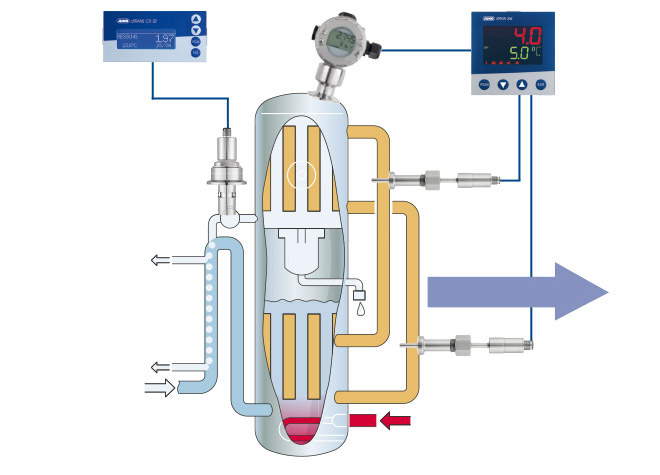 Temperature measurement and control is one of the most important measurement variables in distillation. The vapor pressure curve of liquids as a function of pressure is used to determine the boiling point of the liquid. JUMO offers you temperature sensors specially designed for ultra-pure water systems with a surface roughness of ≤0.8 μm in 316L stainless steel. Temperature sensors have a fast response rate and can be equipped with appropriate hygienic process connections for ultra-pure water systems (for example a clamp or weld-in pocket).